The Maimon lab aims to understand how brains internally compute and store the value of quantitative variables–like heading angles, spatial distances, time intervals, and event probabilities–and then use these variables to guide behavior. By studying this topic in Drosophila, a classic genetic system, a central goal of the lab is to better understand how molecules, through their effect on cellular electrophysiology, impact memory and cognition.

Since the 1960’s, it has been widely accepted that explaining animal behavior requires more than defining stimulus-response relationships. Rather, cognitive processes like spatial attention, reward expectation, sensory prediction, and the construction of internal spatial maps, seem to serve a fundamental role in modifying these relationships. Yet, conceptual frameworks for thinking about such internal processes, and our understanding of their neural implementation, remain in their infancy.

Our lab takes inspiration from the observation that insects, despite having tiny brains, appear capable of performing specific cognitive operations extremely well. For example, desert ants know if they are 30 or 90 m away from the nest and honeybees communicate, with the waggle dance, if a flower patch is 30˚ or 90˚ to the left of the sun. By seeking comprehensive descriptions of how insect brains perform such internal calculations, we aim to provide a framework for thinking more clearly about cognition in larger brains.

We study the genetically tractable fruit fly, Drosophila melanogaster, and we have developed one of the primary approaches that we use –– monitoring neuronal activity in flies performing locomotor (flight or walking) behaviors while glued to a tiny platform.

In one line of work, we have described how the fly brain constructs an internal sense of angular orientation. Humans too have a robust sense of orientation, and its importance is made clear when we become disoriented upon exiting a subway station, or in the early stages of Alzheimer’s disease. Specifically, we have characterized a neuronal circuit in the Drosophila central complex––a set of structures in the middle of the fly brain––that allows flies to build and update an internal compass-like signal. This circuit operates even in complete darkness, wherein flies must internally integrate how much their legs are turning to update their sense of angular heading. The central features of this biological circuit are analogous to models proposed for how rodents build an internal sense of orientation, and may thus inform how the mammalian brain performs mathematical integration.

In another line of work, we have discovered a mechanism that allows brains to add mathematical vectors. First, we found that flies calculate more than just their orientation in reference to external cues (described above). They also have neurons that explicitly signal the direction in which they are traveling (walking or flying) in reference to those same cues. A fly’s orientation and traveling direction differ when she walks backwards or sideways, for example. To calculate the traveling-direction in reference to external cues, we discovered that flies have a neural circuit in the central complex that rotates, scales, and adds four input vectors, which track the fly’s traveling direction referenced to their body axis. The principles of this neural circuit for simple vector math may generalize to other brains, and cognitive domains beyond navigation, where vector operations or reference-frame transformations are required.

The lab continues to study how flies calculate quantitatively accurate, spatial and non-spatial variables, and use these to guide behavior. For example, we have ongoing projects on egg-laying substrate decisions and simple visual conditioning (schematics below). This research program provides a platform for discovering basic mechanisms of how brains integrate, think, and decide. 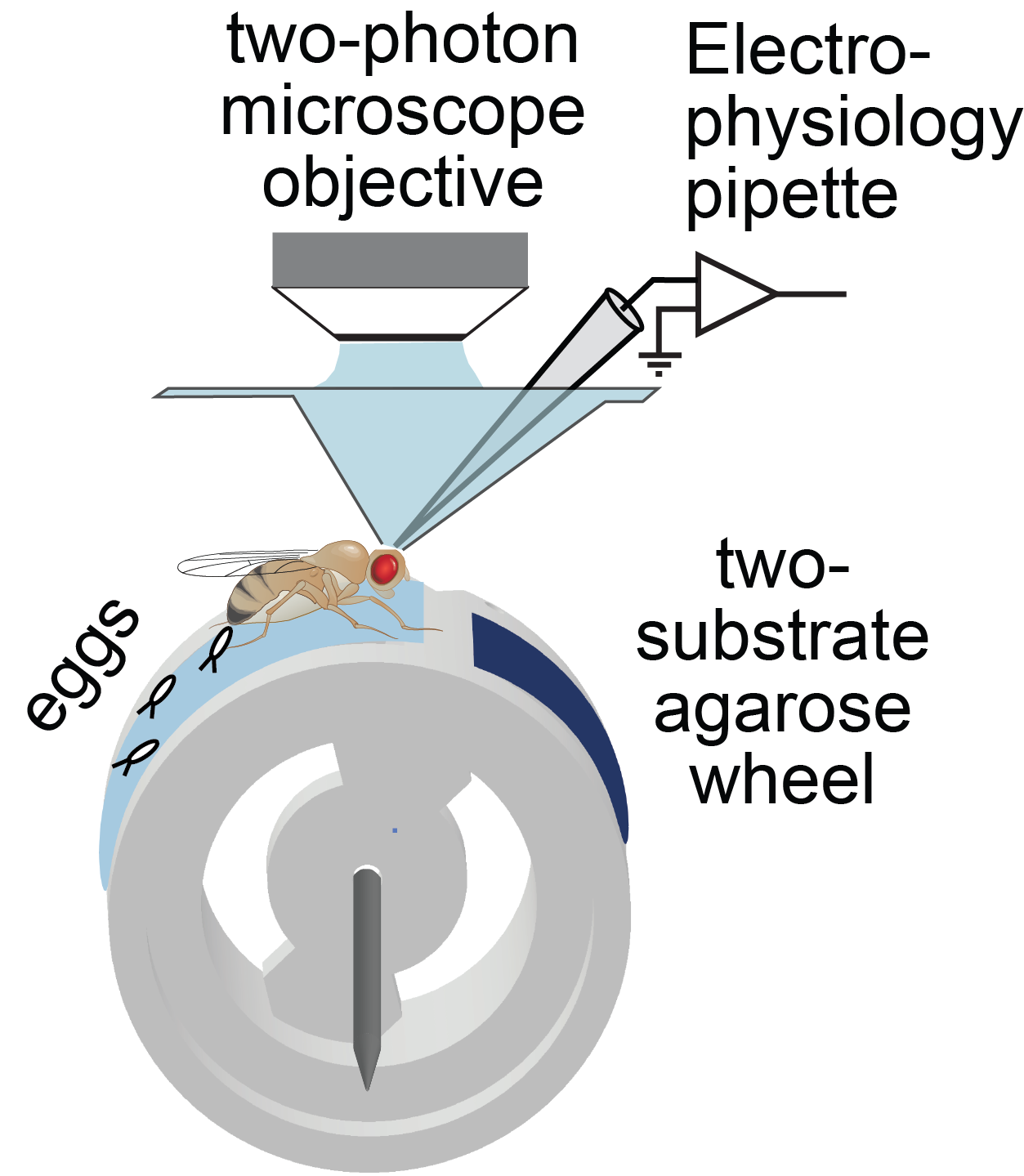 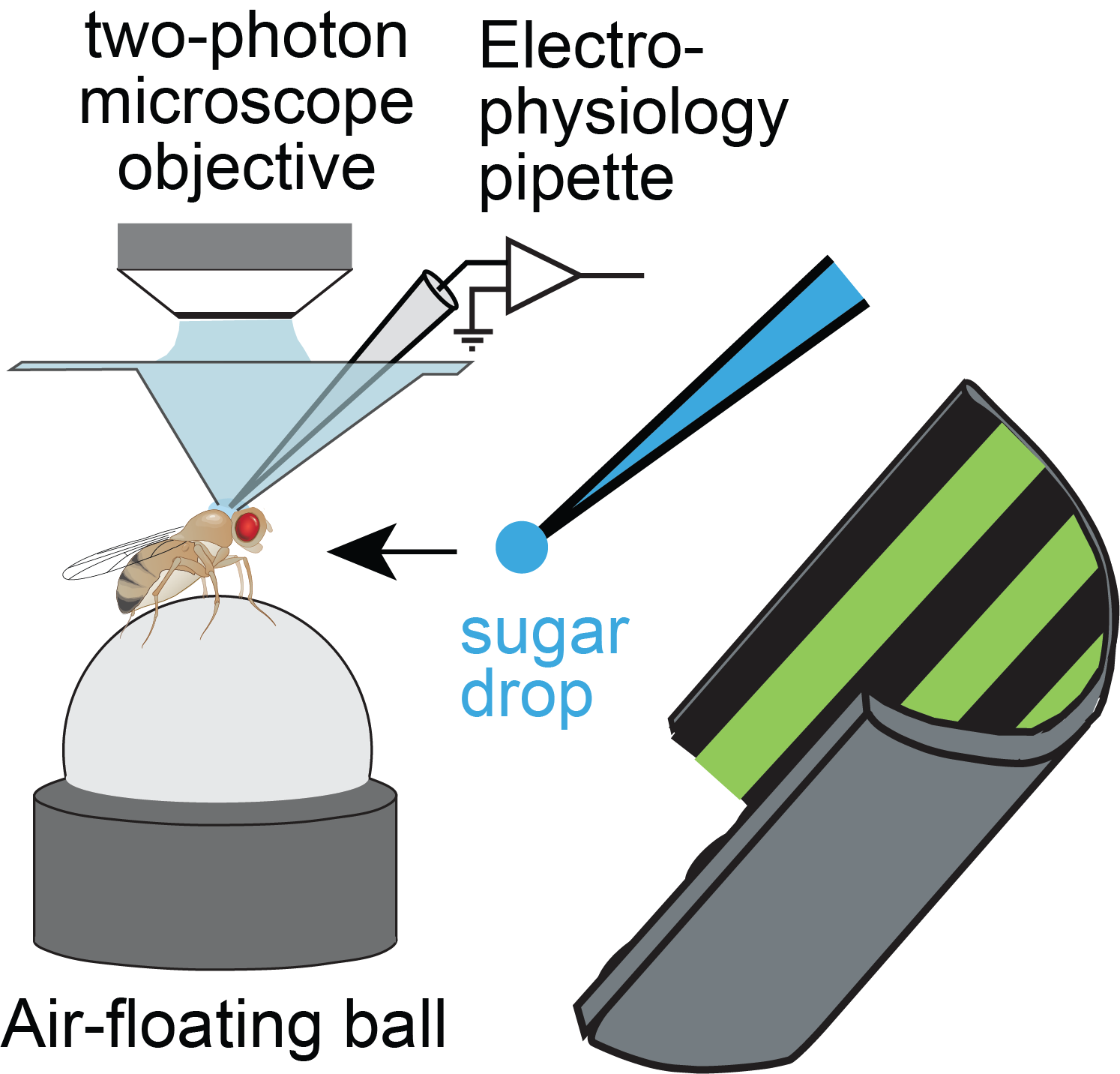